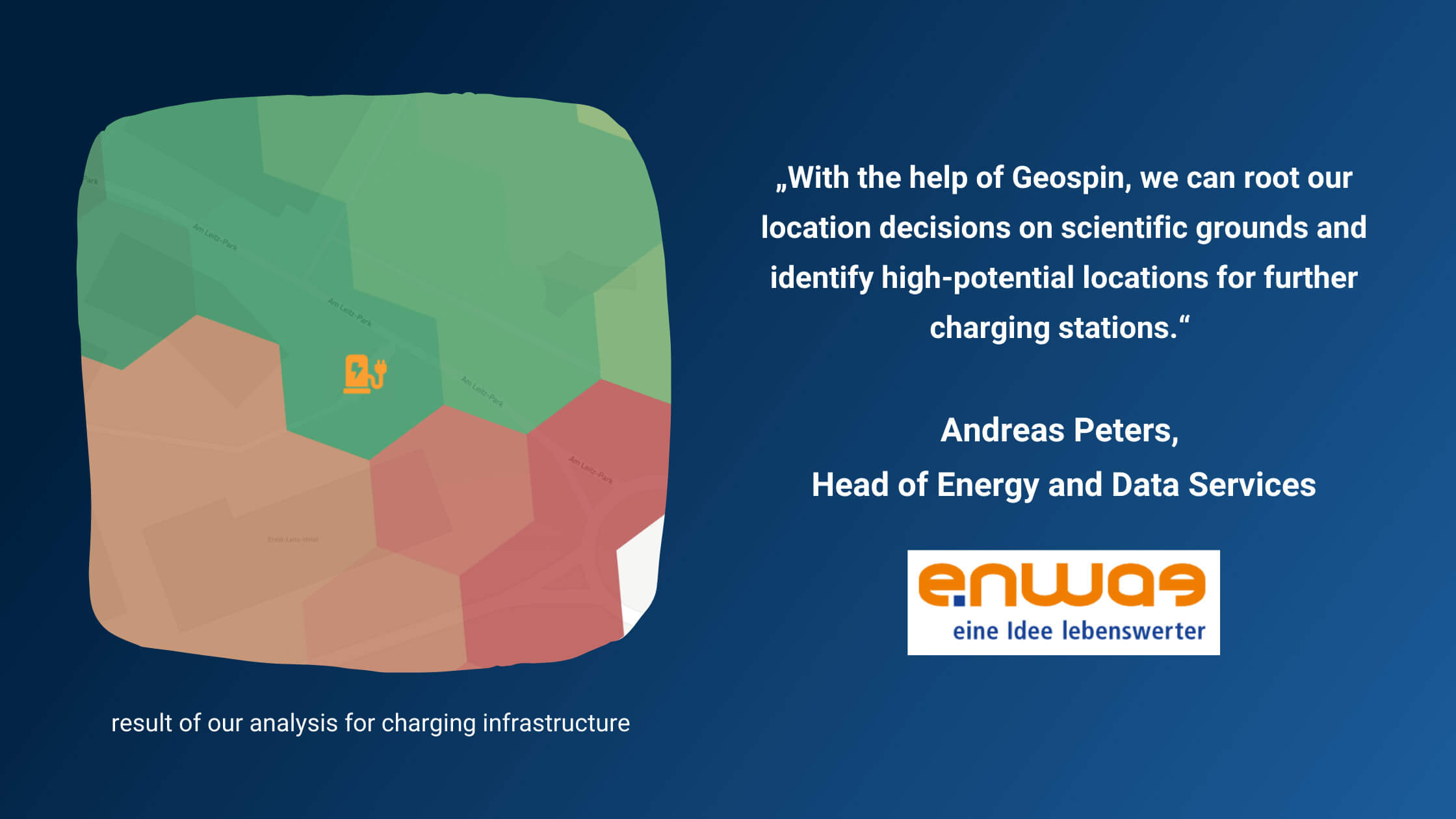 enwag energie- und wassergesellschaft mbh is the energy service company in Wetzlar and the surrounding areas. As an energy supplier, enwag provides its customers with electricity, natural gas and heat. As a network operator, it is responsible for the supply of electricity, natural gas and water in the region. In addition, as a system operator, enwag plans the development of the local charging infrastructure in its supply area. When identifying the optimal charging locations, they rely on data analyses from Geospin to make objective decisions.

With currently 34 charging points in the network area, enwag is no longer a newcomer in the field of electromobility. Back in 2019, they worked with Geospin to have a decision-making basis for the expansion of their charging infrastructure. At that time, they used the precursor to Geospin's current solution: a PDF report that analyzed two queried zip code areas in terms of their suitability for public charging infrastructure. The report included the methodological approach for analyzing the potential for charging infrastructure. The analysis is based on a stochastic forecasting model for decision support, which was jointly developed by Thüga and Geospin and trained on the basis of historical usage data for charging stations in Germany. This is based on various influencing factors such as parking spaces, public transport connections, restaurants, vehicle registrations, and population data obtained via the public census. The report included an analysis of attractive charging locations in the zip code areas relevant to enwag, with map sections and further information on the proposed locations.

A lot has happened in the market and at Geospin in the last three years, but enwag's challenges have remained similar: with the increasing number of registered cars with electric drives, interest in public charging infrastructure also remains high. In addition, charging stations should ideally be set up where they are most needed by users. At the same time, the increasing demand for fast charging infrastructure must be included in the analysis. It is not uncommon for political factors to play a role in the choice of location - who is not familiar with the infamous "mayor's column"?

Many of the suggestions from previous years could be implemented: instead of a one-time and fixed PDF report, the user now has access to an interactive map with various customization options. Evaluations in the area of electromobility are output in kilowatt hours and thus enable a more precise profitability calculation around a potential location. Since the beginning of 2022, users can call up the expected utilization of potential fast-charging stations. The results of the potential analysis for charging infrastructure are no longer limited to individual zip code areas, but are available throughout Germany.

"With the help of Geospin, we can root our location decisions on scientific grounds and identify high-potential locations for further charging stations," says Andreas Peters, Head of Energy and Data Services. He has now been using the new interactive portal with Geospin's Location Intelligence Assistant LIA for over a year.

Andreas Peters reports that four new charging locations have been planned only for this year. LIA helps as an objective basis for decision-making when creating new concepts and drawing up an investment plan. Site selection at public areas is thus well-founded and goal-oriented. 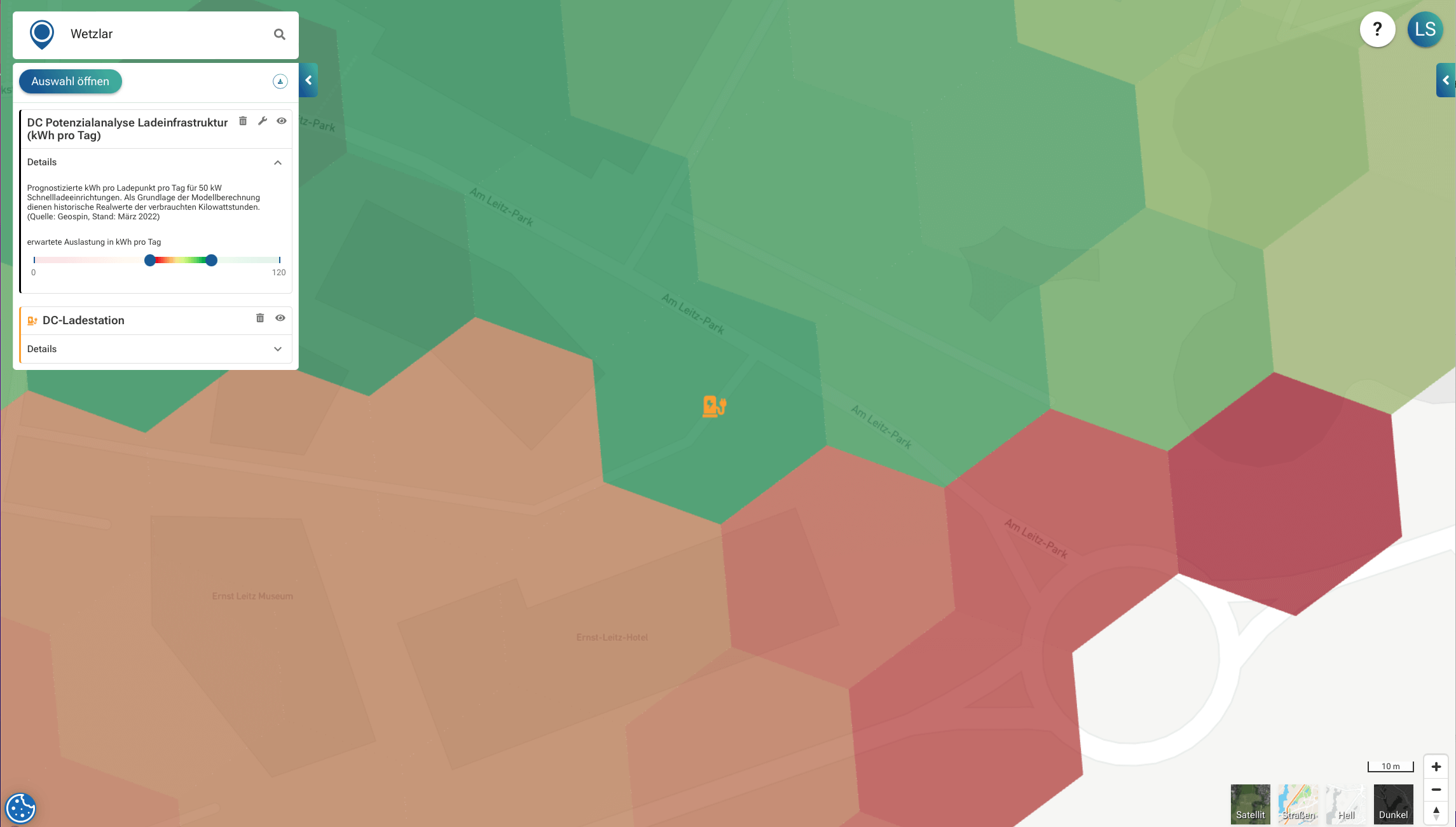 Figure 1 shows the analysis of DC charging infrastructure for part of enwag's service area. Green hexagons indicate areas with comparatively high potential utilization, while locations in red colored hexagons are expected to have lower utilization. Orange charging pole icons visualize DC charging facilities reported to the Federal Network Agency. If the locations selected in advance on the basis of gut feeling then coincide with the values of the analysis of charging infrastructure, this creates confidence in the investment. This was the case in Wetzlar when a charging park with 10 charging points was to be set up.

"The software is quite comprehensive and provides data on diverse topics. In addition to planning the electric charging infrastructure, I can well imagine that using the software would also be interesting for our marketing department," says Andreas Peters.

You are interested in our analysis for charging infrastructure? We are happy to present it to you.